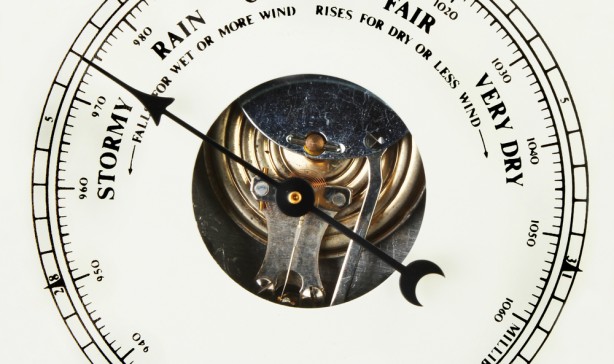 As with many over the new year period, Greenfields has been taking stock of the last year and pondering over the coming year. As part of this exercise it was time to update the Greenfields Research Commodity Price Barometer for 2014 and see if the commodities weather was really as bad as it felt in 2014. Alas it was.

The Greenfields Research Commodity Price Barometer ranks commodity prices on a barometer style rating of stormy (low) through rain, change (medium) and fair to dry (high) comparing current spot prices (last trading day of 2014) to five-year prevailing averages (2010-2014). Again, like a barometer, commodity prices are further divided into those for which the 2014 average price has risen and fallen from the 2013 average price. As ever if you feel there are any interesting “mineable” commodities missing from the barometer, please let us know and we’ll see if they can be added.

The Greenfields Research Commodity Price Barometer shows a rather wet view of commodity prices over the last year. Of the 30 commodities covered, most (24) are now classified in the under performing ‘rainy’ or ‘stormy’ categories. Similarly, over the last year, most (22) have also fallen in price.

No commodities sit in the ‘Dry’ categories anymore, representing commodity prices 25% or more, above the five year average, suggesting that commodity prices as a whole have perhaps ended a boom cycle, that rebounded from the financial crises in 2008-9. Only two relatively minor commodities are in the ‘Fair’ categories, indicating prices are 10 to 25% above five year averages. Of these palladium is the stand out performer, also continuing to rise in price over 2014, whilst although indium prices are high they do seem to be chasing most of commodity prices down.

Most commodities sit in the ‘Rainy’ or ‘Stormy’ categories, most have also fallen in price over the last year. The very worse performers, with average prices 25% or more, below five year averages (‘Stormy’) and falling over 2014 include the enormous iron ore market and not insignificant silver market, as well as gallium and the majority of the rare earths (all except praseodymium, whilst technically gadolinium hasn’t seen any price movement over the last year from 2013 lows, suggesting either a thin, frozen market or problems collating data in this opaque market by Metal Pages).

A number of commodities are currently in the ‘Rainy’ category, but have also fallen over 2014 and may soon be joining iron ore, silver, gallium and rare earths in the very stormiest category. The commodities with prices that are 10% to 25% below five year averages and which fell in 2014 include a number of important base metals (copper, lead and tin) and precious metals (gold and platinum), as well as a range of minor metals: antimony, tantalum, tin, tungsten and uranium.

A few commodities in the ‘Rainy’ and ‘Stormy’ categories do however show signs of turnaround, rising over 2014, albeit from relatively lowly prices. Molybdenum is currently in the ‘Stormy’ category (more than 25% below five year averages) but has risen over 2014, whilst nickel (which has been fairly noisy in Australia this year) and rhodium are in the ‘Rainy’ category (10% to 25% below five year averages), but nonetheless rising in price.

The only other positive news comes from the handful of commodities in the ‘Changeable’ category (between +10% and -10% around the five average), which are also rising in price, including bismuth, cobalt, zinc, and the rare earth, praseodymium.

As for looking forward to 2015, the past is of course no indicator of the future, and commodity prices trends are notoriously bad indicators of the long term future. The year has however started badly with further large falls in oil price, following on from the dramatic movements in late 2014, with key commodities such as copper also following. From an economic and financial perspective (i.e. ignoring the various geopolitical conspiracy theories) the end of quantitative easing in the USA, which may have supported asset prices of all sorts (including commodities), as well as a slow down in commodity consuming China both may both have a role in the recent commodity price weakness. Financial and economic experts will no doubt have a close eye on both in 2015.