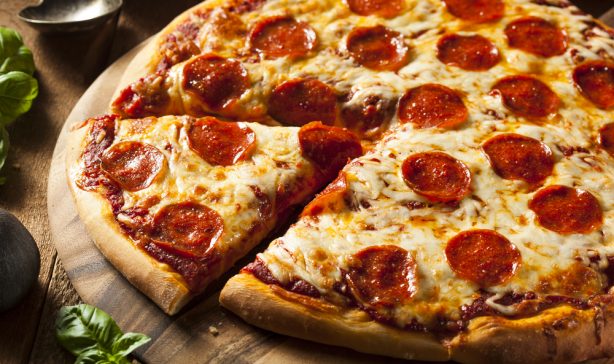 The example focuses on an anonymous mid-tier pizza chain locked in a battle to produce ever-higher quality gourmet pizzas, against its bigger rivals. The higher quality ingredients were cutting into margins, whilst the bigger competitors had larger advertising budgets, which the mid-tier pizza maker couldn’t compete with. Initial analysis showed that the market for pizzas was going more upscale, with a trend towards gourmet pizzas – so how was the mid-tier pizza maker to compete?

A detailed look at the mid-tier pizza makers accounts indeed showed that its trade in gourmet pizzas was not tracking with overall strong market growth in this area, however, its late night pizza business was thriving. This business was mostly drunken revellers looking for a big, fatty pizza to soak up the booze at the end of the night – gourmet ingredients were not a priority here, indeed just the opposite. The mid-tier pizza maker therefore re-aligned its business to produce big, low quality pizzas targeted towards a late-night crowd. Further, as well as big, greasy pizzas, the inebriated nature of the clientele meant that speed of delivery also really mattered, so the company focused on its distribution network, and was subsequently able to deliver pizzas to its clients 10-15 minutes faster than rivals. The strategy was rounded off with advertising focused at the late night crowd (one assumes bus stops and taxi stands) rather than the gourmet crowd. The bigger rivals never responded to this new market opportunity and continued their margin destroying gourmet pizza war.

The strategic lesson here is that even in industries where the market trends and large incumbents seem to place insurmountable barriers to entry, there are opportunities for smaller players to successfully enter the market. As with the pizza company this may require a different market focus, a suitable matched differentiated product, the re-design of the delivery infrastructure and a different brand appeal.

The lesson above from the pizza company could equally apply to the upstart, and now third major player in the Western Australian iron ore industry – Fortescue Metals Group (FMG). The incumbent giants, BHP Billiton and Rio Tinto, produced high quality 62% iron ore, originally targeted at Japanese consumers, though their buyers had long since broadened. The existing infrastructure in the Pilbara all built for and owned exclusively by the giants was worth billions of dollars. This presented a seemingly insurmountable barrier to entry for new comers, as the ‘value’ in iron ore mining comes more from the ability to transport and ship it at low cost, than the mining itself. Being a late-comer to the Pilbara meant that FMG only had access to lower quality iron ore prospects (58% iron ore), whilst it also had no access to bulk transport infrastructure.

FMG however realised there was an emerging market in China for lower quality iron ore, where there was a steel industry desperate to break into and then dominate the steel industry. As a later stage player, the Chinese steel mills were happy to take a lower quality iron ore than the incumbent Japanese and Western steel mills – a situation helped by the strategic backing of the Chinese government (local and national) which wanted a strong steel industry, for a variety of reasons: to secure steel supply to emerging higher-margin downstream manufacturing industries (such as car making); to secure steel supply for the industrialisation and urbanisation of its economy; to ‘improve’ GDP numbers; and to provide jobs to keep the populace happy; and most likely the opportunity to beat their Japanese rivals at something. FMG could therefore focus its ore towards the ‘lower quality’ but faster-growing, and eventually dominant steel industry. Chinese investors would even chip in, supporting FMG in building the required new infrastructure in the Pilbara (alongside some political campaigning by FMG to open up the Pilbara infrastructure for anti-competition reasons). It was in the Chinese steel companies interest to have another major player in the iron ore industry as the three existing majors (BHP Billiton and Rio Tinto in Western Australia, and Vale in Brazil) had significant supplier power. In the end with the right product, targeted at the right market, with the accompanying right partners, investors, infrastructure and marketing, FMG was able to somewhat break-up the global iron ore triopoly and the Western Australian duopoly.

Moving away from the old-fashioned subject of mining [sic] to the very trendy subject of Tesla Motors and electric cars we find a similar strategic challenge – an industry with large incumbents and seemingly insurmountable barriers to entry with a global transport infrastructure system orientated towards the internal combustion engine and the need to pump oil to fuel these engines. Tesla however found its niche markets, starting with the expensive and elite and moving down to cheaper, larger volume markets over time. Whilst this was going on it has put substantial R&D efforts into beginning the re-build of the global transport system including improved batteries and re-charging systems. Like FMG, some government support has also helped. Tesla is still at the beginning of the journey in relative terms, so it will be interesting to see if it becomes the car industry equivalent of a big greasy deep pan pepperoni pizza or some low-grade iron ore heading to China.

For more detail the full article is available to subscribers on MiningNewsPremium.net.

For keen followers of the Strictly Boardroom column, our new book “Strictly (Mining) Boardroom Volume II: A Practitioners Guide for Next Generation Directors” is out now and available as a paperbook or e-book from Major Street Publishing or Amazon.