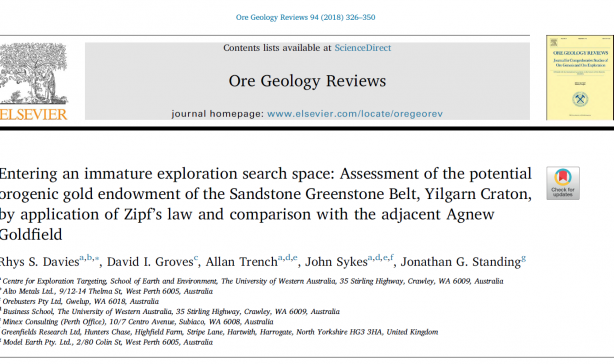 In this paper, which is the first from Sam’s PhD research looking at applying mineral systems theory to practical exploration, we estimate the undiscovered gold endowment of the Sandstone greenstone belt in Western Australia, by anology to the more fully explored, but nonetheless similar in terms of mineral systems, Agnew goldfield, using Zipf’s Law. We estimate there is in excess of 20 million ounces of gold to be discovered at Sandstone, most of it in the poorly explored fresh rock below the oxide zone. Such an application of Zipf’s Law to not only estimate the undiscovered endowment of a mineral province but also identify where this endowment may be hidden is an important step-forward in applying academically generated mineral exploration theories in the practice by industry.

An abstract of the paper is included below, whilst a copy is available on ResearchGate.